We have some news!

We are SO excited to introduce to you the latest little member of our family. 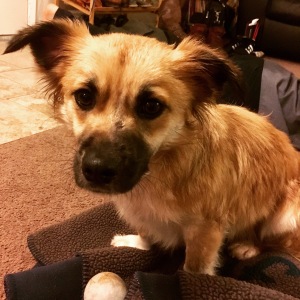 I will tell  y’all what happen, but first we have to back it up a bit and start a few months ago.

Seth has been wanting to get a dog for a while. We had been going back and forth about it for some time, done a few trips to the humane society but found nothing. We had talked about breeds, and I had laid down a few ground rules starting with; No puppies, no dogs that have to be inside only, no loud ones. I had thought I had set the bar high enough..

Then last Saturday he had the day off and we were planning what to do, he suggested going to the humane society. So off we went.

And within a few minutes he had seen Alfie, who’s name was Jerry then, and fallen in love. We got him out in the interaction pen and for Seth, that was it.

I, on the other hand, was less excited and a little unsure. We we put our name down for them ti call if he became available to adopt and left.

For the next few hours Seth proceeded to name every quality of this dog and sing his praises, while asking repeatedly if I was sure I didn’t want him.

The next morning we were making breakfast before church and there was silence, till a voice came down the hallway..

Cue the eye roll and the mutter “for the love Seth, shut about this dang dog..”

Then a miracle happened.

After church finished Seth had no jobs to go to, which left us without anything to do and a few more hours in which to adopt the dog, before he went to someone else.

I relented and said we could go back to “See him again” and of we trotted. After we got him out again he ran right up to us and snuggled in *i’m positive Seth sent him some kind of telepathic message..* and five minutes later we were totting this dog home.

He has been an absolute dream of a dog. He’s house trained, doesn’t bark, LOVES to cuddle and chill out. He’s SO excited when we come home and he loves being outside, which is good since thats were he is going.

The only thing is we have NO idea what breed he really is! We have been told everything from King Charles to Corgi to Terrier.

We do know one thing though; he’s pretty stinking cute. 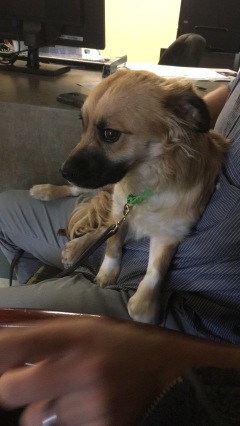 So fellow dog owners, any tips and tricks to give me? And anyone know what breed he is?!

One thought on “And then there were three…. ;)”

Seek & You Shall Find…